Our headquarters and Interpretive Centre is at "The Commissariat", King's Navy Yard Park, 224 Dalhousie Street, Amherstburg, Ontario.
The Commissariat Building is owned and maintained by Parks Canada, and was built in 1831 as the Fort Malden office in charge of purchasing flour, beef, straw, firewood and other staples for the garrison from local contractors. The Commissariat Department also managed the pay and finances of Fort Malden, as well as trade with the British Army's indigenous native allies . Although the building was converted to a private residence in the latter 1800's, it was purchased by Parks Canada in 1983, and restored to its original appearance. The Provincial Marine received a grant in 2002 from the Trillium Foundation to rent the building, and operate it as a headquarters and interpretive center for the life and times of Provincial Marine sailors and their families.

The Provincial Marine Amherstburg Reenactment Unit was formed in 1997 by a group of people interested in history, sailing, acting, the outdoors, and other associated subjects who wanted to help educate others with regard to the rich past of Amherstburg and it's naval history. We are a registered non-profit charitable organization in the Province of Ontario, with a Constitution and  an elected Board of Directors and Executive. The unit owns two boats, one canoe, a 3 pdr. bronze muzzle loading cannon, two swivel guns, and a variety of re-enactment tools, weapons, camping gear, period-correct clothing, and historic displays. The organization is funded through membership dues, charitable contributions, and partnership with the Paradise Charitable Gaming Association in Windsor. We receive no funding from local, provincial, or federal government sources.

The mandate of Provincial Marine Amherstburg is to:
​
Please stop by the Commissariat Building in the King's Navy Yard Park and learn more about us.
​
WE ARE RECRUITING!
If you have ever dreamed of being a sailor in the age of wooden ships and iron men, or a lady in the romantic days of Jane Austen, we want YOU as part of our crew!
Learn how to sail historic boats, fire cannon and muskets, and handle a cutlass. Enjoy historic camping in venues where others are never allowed. Cook period dishes over open fires, sing shanties around a campfire under the stars, and attend balls and formal dinners in period-correct dress. Help teach others the rich history of Canada and of southwestern Ontario and the Amherstburg area by LIVING the experience before their eyes.
CONTACT US FOR FURTHER INFORMATION! 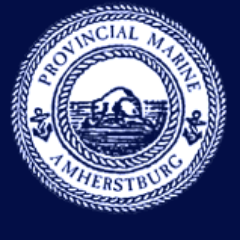